Some have commented that I’ve “lowered” myself to the level of dog walker – that I’ve wasted my college education and experience. I see it quite differently! I believe I’ve raised my standards considerably by making this career change.

I still remember when I became disillusioned by traditional employment…

It was 2000 and I was working as a Social Worker for Fresno County. It was a very dark job, with low pay and mediocre benefits. I always felt like anyone who spent more than 5 years working there had just given up on life – or was expecting life to start at retirement.

At any rate, I had this co-worker. We had been hired around the same time and had the same job – just in different units with different supervisors. I assumed he was a decent guy. Well, one day, he was caught red-handed in a county vehicle, picking up a hooker. Yes, during work hours. Whatever people want to do with their lives, I don’t really get too involved  – but here’s what bothered me… He STILL HAD HIS JOB AFTER THIS….

This was not taco bell. This was county social services – where we expect and guide families to “do better”…right??

I started wondering what my job was really worth if that guy had the same job.

Shortly after, I started another job, with similar responsibilities. It was in South Central, at the Regional Center. I hated that job, but that’s besides the point. The kicker with this job was that we worked in a super-secure building with key passes and codes. Security guards everywhere. Nobody was getting in. Yet, theft was rampant! Yes, THEFT…people’s keys, wallets, purses, food, office supplies. Just disappearing. Some college educated, employed individual was going around taking other people’s stuff!

I just couldn’t take it anymore. These were the people I was supposed to be “equals” with.  No Way

So, I’ve “lowered” myself to the level of pet sitter and dog walker, and I’ve never looked back!

I’m done. It’s my final unhealthy addiction. A while back, I gave up those chemical non-dairy flavored creamers (i.e coffee mate). It was probably the most difficult addiction  I’ve ever had. Soon, it was replaced with an addiction to half-and -half.

As a result, I gained 10 pounds in 6 months.. and I’m bloated all the time! So what’s a body to do?? i’m switching to coconut and almond based creamers. I found one I like, made by Califia. It’s half coconut cream, half almond milk. It’s pretty good! It doesn’t cream coffee like cream… nothing does.. but it’s 1/3 of the calories.. and no bloating!

My real challenge is when I’m having coffee “out”. Starbucks doesn’t have coconut cream- just coconut milk. But today I got this combo: Grande Iced Coffee+ 3 pumps sugar free vanilla+ 1 splenda+ coconut milk. I must say, it’s pretty good! It would probably be even better with cold brew.

My real struggle is the “thin-ness” of milk alternatives. I guess I just have to stop expecting my coffee to be white 😜

I didn’t even know it was possible. I’ve always hated driving. sitting. stuck in traffic. the terrible things you see. the recycled air. the ever constant threat of the car breaking down. There’s just so much to hate about it. Really.

Fast forward to 2 weeks ago when I dusted off my bicycle and started running errands with it. It’s so freeing. I’m not stuck in traffic. There’s little fear of a breakdown. Alternate routes are actually fun. Plus, I get great exercise, which my legs are thanking me for!!

So now, I evaluate each and every trip out of the house. Do I HAVE to drive?? Unfortunately, because I live in Southern California, the answer is often yes. Even public transportation is terrible here. I have clients 20 mikes away that I couldn’t even GET to (or, within 10 miles of) on public transport, here. It’s truly a joke. But I digress.

Right now, I’m riding an older, heavy mountain bike. I struggle to ride 7 miles (we have lots of hills!)

My goal is to ride 20 miles one-way, fast and easily. Then, I will be truly free.

I learned something about myself this month. I’m self motivated. I’m motivated by internal sources…my own personal dreams and goals. It all comes from within. Continued motivation comes from results – even small results. That goes for my business, as well as my own personal goals.

I knew this. But I thought maybe I could add some fitness motivation through external “reward”. So I joined two competitions. Both through local NutriShops. One paying $500 and one paying $200. Not a ton of cash, but it comes with the added “bonus” of getting my body fat tested every two weeks.

In the past 3 years, I lost over 25% body fat and over 100 pounds- so I thought some friendly competition could help me lose this last 12 pounds and 3-4% body fat? As it turns out, no…

So in 8 weeks, I spent well over $200 on supplements…and lost a whole…whopping…. are you ready for this?? 4 pounds of body fat. Whoop De Do. I have no idea where I stand in the competition. In my age range, I could very well be “winning”.  But I don’t care. I have officially dropped out of the competitions and I’m back to my regular workouts and regular diet. Whew. I’m glad that pressure is off.

This happens with my business as well. Not that I’m afraid of competition. I do my thing. They do their thing. I only have so many hours in a day. I turn down a lot of work  and refer potential clients to other pet sitters because I’m simply don’t have time.

Maybe my problem with “competition” is the exclusivity of it all. If I “win”, someone else “loses”, and a small amount of progress becomes “not enough”?  Sometimes, for me, good enough is just that.

I’m sure some people get motivation from a $$ prize, or out-bidding someone else for a job. I just happen to not be one of those people. Not sure what that means.

One thing I know. I’ll always do my best.

It’s not a luxury I’ve always had. I was thinking of this today as I exited the freeway to go to the gym…instead of a 9-5 job (where I assume most of the cars on the freeway were headed). I was thinking how lucky I am to have the time, energy, health and nutrition available to actually focus on my fitness!

About 18 years ago, I remember dropping my daughter off at before-school daycare so I could get to work by 8am. There was this woman also dropping of her child. But there was something strikingly different about her. She was in excellent shape, AND she was wearing workout clothes!! At the age of 23, this made a huge impression on me. I wondered how this was possible. She has a child, she pays for daycare, and she clearly has time to exercise.

There are a lot of things that have to be in place in someone’s life in order for fitness to be a priority. It has it’s very own “hierarchy of needs”.

There are a lot of things that can get in the way of making fitness a way of life.

If your health is poor

If your budget doesn’t allow for gym memberships / gym clothes

If your budget doesn’t allow for adequate nutrition

If you can’t/ don’t drive

I have experienced EVERY one of these!! Sometimes several of them at once.

When this was “my life”, fitness wasn’t even #10 on my list of priorities. Once I got my general health in order, I was able to work on the rest of the “hierarchy”.

If fitness is a major priority in your life, you’re very fortunate! Don’t take it for granted, and don’t judge those who aren’t there yet. It’s definitely a luxury.

Last week I got two “compliments”. The people didn’t know they were complimenting me, but it was pretty awesome.

#1 A lady at the gym thought I was the class instructor. Then she asked if I was a trainer. When she found out I wasn’t, she inquired as to who my trainer was. It was pretty awesome.

#2 I joined a “Transformation Challenge” at my local NutriShop. The guy working there was obviously a fitness buff, and probably competes in physique events. After I did my InBody scan, he commented on how “people like us” usually don’t have a chance to win these challenges because they are strictly weight loss (this one is based on fat %, which goes down as you build muscle if your weight stays the same).

I guess my “us” has changed. When I was 250 pounds, the only people who used to group me in with them were the overweight, overworked or overeducated pet lovers. Never fit people. Ever.

I have to admit it’s kind of nice…. 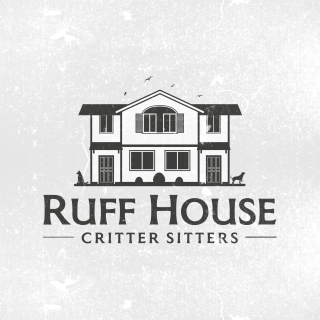 April Coe BA, MBA Founder and Owner, Ruff House Critter Sitters: I’ve loved animals my entire life, and always wanted a career where I could be around them. Somewhere along the way, after completing my degrees, I became a Social Worker instead. After trying to work with people for a few years, I ultimately decided I really would rather work with animals…so here I am! You can visit my website at http://ruffhousecrittersitters.com I hope you are able to find what you’re looking for. If not, please call or text me at 406-371-3910 I manage my own website design and content (which explains a lot! Ha!) and I’m available to answer any questions you may have.